In 2014 I stumbled upon growth hacking and founded the first growth hacking agency in The Netherlands. Together with two co-founders and named the agency RockBoost. This happened after working on a startup for one year, which ultimately failed. I studied success stories from the US and learned about growth hacking.

During my time at RockBoost, I’ve worked with many different clients. We won many awards, including one of the top 10 worldwide growth hacking agencies, Dutch Interactive Awards for Ecommerce and Branding.

During the summer of 2020, I sold my shares to my two co-founders. The entire story is covered in my book Structuring for Extreme Revenue Growth and on the growth hacking book website.

My exit from the growth hacking agency was in the middle of the corona pandemic. At that time my daugther was only 6 months old, so I took the time to be with her and explore my next steps in business. In October 2020, I wrote the growth lever cheat sheet together with my wife. Things really took of after that moment as many people reached to me looking for a growth hacking consultant.

One year after my exit, I was able to work on one of my passions again, which is growing agencies. Agencies from around the world approached me and asked for my help, as I’ve seen the journey of growing an agency to 85 people. My growth hacking book became an excellent tool for agency founders and their teams to impact their clients. 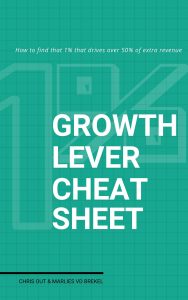